So, it turns out that one of the million things that is fun about being married is listening to each others’ music collections. I don’t know if that’s fun for everyone who gets married, but it’s fun for us. We actually started this long before we were married. For example, we made mixes of sorts for each other while we were dating, which I then attempted to merge and expand into a wedding reception mix, which we in fact used at our wedding reception. But now things are getting more entangled, as they should. She brings things home for me from the library. I sometimes try to think of new things she might like. We listen to things together. I’ve desired to purchase certain albums that were on her computer because I have a fetish for owning the actual CD. Okay, so maybe I already have purchased a couple such CDs (honest music nerd confession).

What I’ve been delighted to notice through this process is that Gin has a lot of music that I have been interested in or curious about but never actually investigated, probably because it was too “folky” or too “feminine” or too something to grab my attention away from my usual obsessions. So far, she’s opened my eyes to the likes of K.T. Tunstall, David Gray, Patti Griffin, Hem, and the Mormon Tabernacle Choir (I’m not kidding! It turns out that since the old Hymns of Faith record from 1960-whatever, the one where Bruce R. McConkie guest raps on “I Believe in Christ,” their arrangements and song selection have actually gotten a bit more interesting, but in my silliness I never gave them a chance.) On the other hand, at least at one point Gin said that she hasn’t had the impulse to find new music in a while because she said that the music I have is fulfilling that need. She is now enjoying the likes of the White Stripes, Beck, and Radiohead, thanks to me. I think she may even be rethinking her dislike for U2. I’m not sure if that’s a fair trade-off — I may be corrupting her tastes, while she is improving mine.

And right now, I’m listening to the Sundays. Years and years ago, in my first naive junior high acquaintance with what was then called “alternative” music, I heard “Here’s Where the Story Ends” on the old X96 radio a few times. I liked it, but I never knew who the artist was. It’s troubling to think back on how hard it was to find music before the Internet. Years later, I somehow was aware that the song was by a band called the Sundays, but at that point I never bothered to check them out. I dismissed it as too much like the Cranberries, or some such nonsense. (More like the other way around, but anyway.) 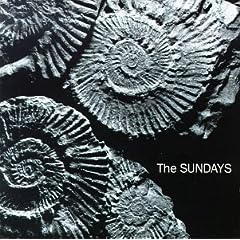 But suddenly this beautiful little album pops out of my wife’s old travel CD folder, and I’ve listened to it at least three or four times in the past few days. It’s not like my life would have been vastly different if I had listened to Reading, Writing and Arithmetic all those years ago. It’s just a good little album, nothing that will change one’s life or even one’s musical worldview. It’s very much in keeping with a lot of other music that I have listened to over the years. But it’s nice that my wife has opened my eyes to things I didn’t bother with before, or was afraid to try. We don’t like everything that is in each others’ music collections, but’s it’s nonetheless an enjoyable process, and music’s just one little thing. Marriage makes it a lot easier to expand your experiences and have the guts to try new things. At least my marriage does. Last month, we went together and donated blood for the first time in either of our lives, and neither of us fainted. We tried the Opera (and left at intermission). We went to our ward wood project and I learned how to chop wood with a good old-fashioned ax, which was hard, fun work — without her encouragement I would have probably stayed home and felt stupid. Gin is getting to church on time almost every week now. This coming month we are going to do some actual honest backpacking, and we are going to hike Timp, both things that Gin has done but I never have. I’m starting to show Gin all the obscure dirt roads I know that are fun to explore – the fact that we both think they are fun to explore is what makes the difference, I guess.

I feel that one of the idiosyncratic usages of this blog deserves a slight explication, since I continue to use it:

I just decided to change it to a beet.

The beet is a quiet, unremarkable root vegetable. It grows beneath the ground, and someone must dig it out. It has a strong flavor and a rich, deep color that can stain. It actually has a lot of sweetness to it. It’s not everyone’s favorite. In fact, it may not be anyone’s favorite. But still, the beet waits patiently in the cool of the cellar for its time to come. I like it in salads and on hamburgers.

New things will be coming shortly. Enough with the photograph cop-outs. I just couldn’t quit it with the dead moth I found. I took a lot of these pictures in big groups but I’m stretching them out into different posts, to compensate for the fact that I’m not writing anything. My new camera is waiting in a box for me at home. Yay. Credit to Gin for the title. The other afternoon we came home to a world of floating fluff. Fun for the kids. A camera that focuses correctly and does not have serious white-balance issues is being shipped to me right now. I am very excited.