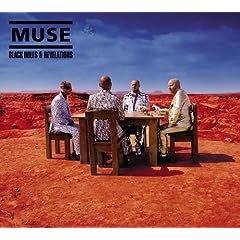 The silent alarms start going off in your head, because it looks like it’s going to be prog rock before you even listen to it. The cover fits squarely into the surrealist landscape prog rock tradition. A cursory look at the tracklisting reveals a closing song entitled “Knights of Cydonia.” The sounds coming out of your speakers during the opening moments of the album do nothing to dissuade you, as they feature a synthesizer figure which bears more than a passing resemblance to the theme music from Dr. Who.

And then something incredible happens. Over all of this prog rock pomp, the band get all pop on us, aping the likes of Prince, Coldplay, Timbaland/Timberlake, and New Order. But its still all firmly bolted to that solid Queen/Rush/Radiohead prog base. I think this is the first unabashed prog-pop album I have ever heard. It sounds like what Marillion have been trying and failing to do for the past 15 years with all their attempts at “mainstream” singles, and it sounds like what I think a lot of people wish Radiohead had done since Oklahoma OK Computer. Whether you agree with that or not I don’t care. All I know is that the anti-prog rock processing chip that was interfaced with my brain a few years ago (I think maybe the Strokes put it there) finally malfunctioned, and at long last, thanks to this album, the loop is broken and I am deprogrammed. I suddenly have this aching desire to listen to prog and quasi-prog. I’m going to get my Marillion albums out. I’m going to get all the Catherine Wheel albums I can get my hands on. I’m going to jam Permanent Waves and Grace Under Pressure. I’m going to give The Mars Volta another chance. I going to listen to everything Pink Floyd ever did. I may even dig out that old vinyl copy of Tarkus I found in the 99 cents bin once. O, most wonderful world of immaculately produced, melodramatically delivered and sometimes pointlessly complex but delicious music: why did I ever turn away from you in 2001? I’m no longer worthy to be called by your name, only let me be your servant.